Rip Rap War. That time of year where we in Atlantia fight over who owns a tiny little island in the James River Estuary. No one gets to visit said Island, but we fight over who owns it on a yearly basis…This Island is the now-decommissioned Fort Wool, located on a man made island called Rip Raps across the mouth of Hampton Roads Harbor from Fort Monroe, is also in Hampton.
This year was a Banner year at Rip Rap War. We had Three very very Talented Ladies Raised to the Order of the Laurel, and one very Chivalrous Man Knighted.
It was also the Barony of Marinus’s Birthday and on the Friday of the event they had a marvelous potluck. I made sweet pickled plums as my contribution to the food filled event. Someone made shepherds pie and it was to die for. Shout out to whomever they are, that stuff was the Bomb!
My contribution is an easy thing to make.
You’ll only Need:

1 tsp each Fennel, coriander and mint

Pack the plum slices into jars.

In a sauce pan put vinegar, sugar and spices and bring to rolling boil. remove from heat, stir and let cool 5 minutes with lid on pan. Pour the liquid into the jars until at the max line or 1/4 inch from the rim. Put on lids and let cool 30 minutes. If water canning follow the directions on the package of jars and canning pot.

Place the jars in the fridge and keep at the back of the fridge for 1 whole week, turning the jars over every day. Don’t Shake The Jars! it bruises the fruit and makes them mushy.

Good for Hard Pears, Early Peaches and other stone fruits.

I wonder what I shall make for Next year?

I have been a participant and enthusiast of the Society for Creative Anachronism for many many years, and in all this time have heard of finding the One Thing. Yeah, people used to mention finding that one extant item that has all the things on it. That mythical thing. The One Thing to prove all their favorite techniques were used within the time period espoused in the SCA.
We all have a quest to find that One Thing, but for us embroiderers there is at least one anomalous item that has almost all the things on it. It’s Not a dress.  That One Thing or Criptid Extant Piece that according to many historians, back when the internet did not exist, could not possibly exist…because if they had not found it..nobody would…well…(yeah, I know…jerkiness does not become me..In my defense…It’s 330 am and the insomnia Fairy is visiting)
Thanks to the oh so lovely Internet and Tourists..Many Cathedrals have opened up websites that share those treasures in a grand gesture so that people will come and visit their treasures. And the tourists who visit those treasures have shared their photos of the visits and the exhibits. Good Gads..I wish I could travel.
Cuz the first place I so would visit is the Aachen Cathedral and it’s treasury, where textile geeks will find that Criptid Piece so craved. 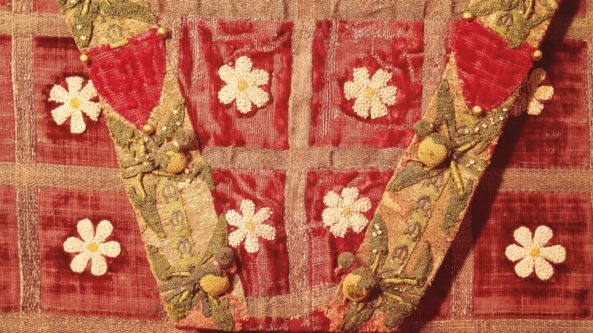 Picture taken from the website listed at the bottom.
The Coronation Robe/Cappa Leonis is that Criptid Piece. Part of the Aachen Cathedral Treasure, this one Extant Item has all the Things.
Made in the 14th century…thats the 1300’s..it has appliqued gold roses, and couched decorative trees and vines and get this…tiny little birds made using tiny stuffed figures covered in detached button hole stitches..These birds are about the size of a us quarter. The all over design of this lovely Coronation Robe is little white and yellow flowers..of get this..French knots…of silk thread on scarlet silk velvet..with gold-work embroidery so well done it looks like woven gold bands appliqued as a grid border..I have always gotten told that French knots are not within period..Guess what ladies..in this one instance..this one item..there they are in all their knotty glory..French knots..I doubt they called them French Knots in the middle ages..but whatever they called them back then..this stitch has come a long way.. Oh and don’t forget them little birdies. Modern embroiderers call that technique “Stumpwork”, but whatever they were called in the middle ages, finding them on one garment and made before 1650 is literally a gift from the gods. Layers upon layers of appliqued braid-work, intertwining vine-work, stumpwork birds, Laid gold-work and ribbon, and all on the front band…Wow…and the bottom hem itself is a marvel. Embroidered with the figures of all the saints and apostles and clapper-less silver bells that ring softly as the robe is worn. That thing must have wowed the crowds in a coronation when it was first finished.

Going to be in Germany this year?

Go and see for yourself the Cappa Leonis Coronation Robe at: https://www.aachener-domschatz.de/neue-ausstellung-ab-15-september/ and don’t forget to share those pictures. So that those of us who cannot travel can see that marvelous coronation robe through your lenses.

They updated the site and it’s dated for September 21st..so ignore 15 September in the link…