At the Beginning, of the year, I joined a small group of intrepid seamstresses in a monthly challenge (fortnight). I found this group quite by accident looking for inspiration for historical costume and tutorials. Upon joining this group, I promptly set to work documenting what I was making for the January challenge of “Firsts and Lasts”.

January: Firsts & Lasts – Create either the first item in a new ensemble, or one last piece to put the final fillip on an outfit.

As my beloved needed new medieval garb, I forced him to brave the fabric store and purchase fabric for said garb. My beloved being of Byzantine persona, we looked for fabrics close enough, and I DO mean CLOSE ENOUGH to the textiles in museums…yeah..We found what could only be called the Hawaiian Prints of the Byzantine Era and went with it…Paisley, it was Paisley..black gold and silver paisley, with a dark lavender/gray under fabric for under- 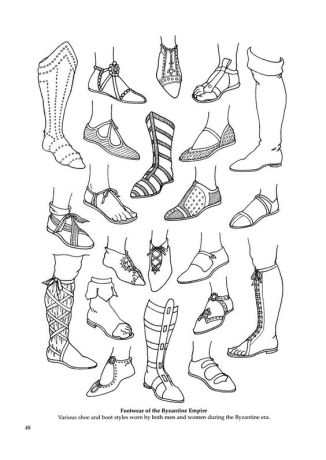 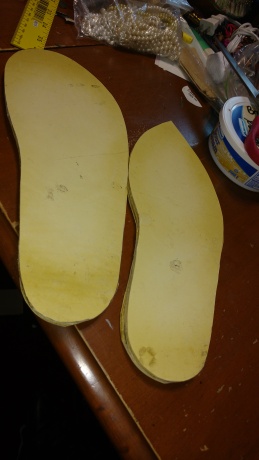 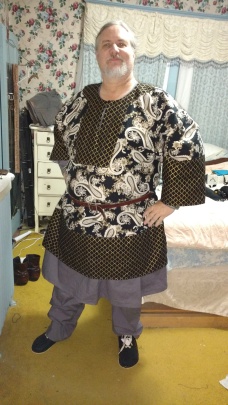 tunic and pants..as getting my beloved into Hosen would have been nigh on impossible… Those were the firsts…but for this I chose Lasts..

His shoes…now the typical Byzantine shoe looks more like a woman’s shoe to modern male eyes and we could not make him sandals in January…nope…nope…nope.

So, I went with a combination of medieval and modern making him a pair of leather lace up slippers/short boots.

I and my beloved were going to go to the local 12th night festivities, at least until it dumped at least a foot of snow on the roads making it inadvisable for travel on the day of the event…So for now, they hang in the closet, awaiting the day that I can make him put them on and enjoy his day of getting out of the house medieval style.

To See more of the Historical Sew Fortnightly challenges do go have a look see!